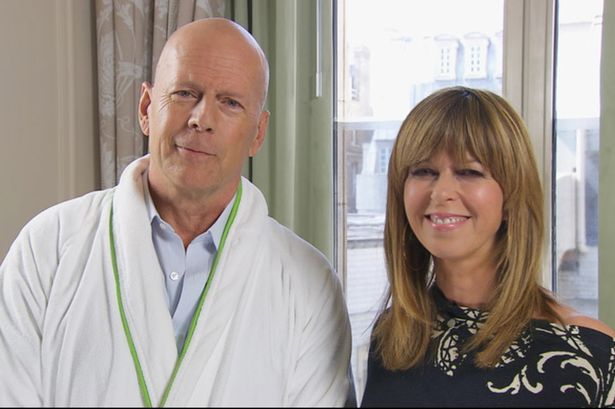 So what’s with Bruce Willis these days? Seems like he’s part of the Marlon Brando, “I just don’t care” syndrome, which certainly does make for interesting gossip fodder. Or maybe he’s feeling kind of meditative and low key, and perhaps a little bit bored too, with all he’s expected to do to sell a movie.

We at Boca Terry love Bruce. Ever since “Moonlighting,” we’ve followed him with a fine-tooth comb. From an adorably comical PI he became a very ‘Rocky Balboa’ kind of guy pretty fast, also rising to many occasions as the perfect leading man.

No matter what kind of delivery he has on a talk show, you’ve got to love him. He’s just always true to himself, and who doesn’t admire an authentic guy?  And now, here he is on the British morning show, “Daybreak “ sitting down with Kate Garraway in a white bathrobe. He may not be selling his new flick, but he certainly is doing wonders for the robe industry in that sparkling white baby wrapped around a body that is fitness personified. We do confess, we love the innovation.  And you do realize, he wore it coat-style over a very snappy shirt and slack outfit, making it into a sort of modern day dressing gown. Way to go Bruce!

With even more of the Brando style, he does seem to be in his own little private Idaho these days, not making much of an effort at all to project his personality. But hey, we’re in the hospitality business. What do we know about the peregrinations of an artist’s mind, let alone one who has been in the limelight long enough not to care?

To tell the truth, we are just happy as clams to see a pristine white bathrobe looking so much like a Boca Terry original. Like proud parents, any time we see one of ours, or a close facsimile, it brings a smile to our faces. Frankly, we love the bathrobe to be the star of the show, and any time a celebrity can make this happen, even unwittingly, we applaud with glee.

For sure Willis is creating a look of his own. And by the way, in this case we do love that green piping, which is something quite akin to the customized robes we so lovingly produce for our clients when they want a little color added to their whites. And of course, the elegant drape of a terry wrap is always going to make whatever is underneath it look like a million dollars, even if its just someone’s bare essence.

And so we have another celebrity robe shot that proves that the classicism of the wrap-around terrycloth bathrobe will never die. Touché, Bruce. You’re always with it and often even ahead of the curve, no matter whether you are shining like the star you are or staying as low key as a piece of driftwood on the sand.