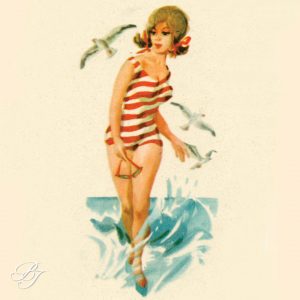 Before the Cabana Stripe became an adored, iconic style beloved by beachgoers, it was the uniform of both working class people and mariners around the world.

The Cabana Stripe conjures various images, but its pattern is unforgettable. Minimalistic, bold stripes in black or various colors alternating with white. Often vertical (but occasionally horizontal), the stripes have become a symbol for chic, sophisticated design.

However, this wasn’t always the case. For instance, when stripes were introduced in medieval times, they were seen as blasphemous. Stripes were only worn by the lower classes: the prostitutes, servants and criminals. Prison uniforms famously followed suit with horizontal black-and-white stripes.

Then, in the mid-1800s, Queen Victoria dressed her son Albert in a sailor suit with bold stripes. It was then that stripes became associated with all things nautical. Half a century later, Coco Chanel borrowed the “marinière” look from sailors in the French Riviera and brought it to France. Henceforth, the world became obsessed with stripes.

Today, the Cabana Stripe is not merely nautical in nature, though it does evoke images of sun-kissed beaches. Designers rely on these repetitive wide stripes to infuse both posh and playfulness into an otherwise lackluster space:

The word cabana translates to “cottage” or “hut” in Spanish. Therefore, it’s no surprise that the cabana stripe is a popular choice for hotels and resorts. You might spot the pattern on patio umbrellas or in rich, nostalgic colors—tints of blue, turquoise, gold, green and yellow—on cotton Cabana Stripe towels, perfect for poolside use or at the beach.

From rugs and curtains to pillows and comforters, the cabana stripe is still a popular, highly recognizable pattern in homes around the globe.