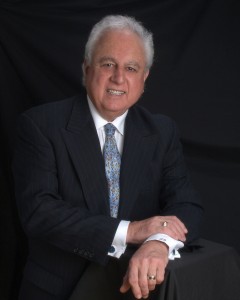 After hearing one such story, Boca Terry has decided to provide our Robe Report readers interviews with some of these remarkable people. Our first interview features one of the biggest icons in the hospitality industry, the humble and charismatic, Mr. Jay DiPietro – the self proclaimed luckiest man in the world.

As ebullient as he is young, this 75 year-old father of nine children, grandfather of 24, and great-grandfather of one continues to be as excited about life as he was when he was just starting out as a mere tadpole. Happily married, with a loving family and a staff that he considers a second family, DiPietro attributes all of his triumphs to one word: luck.

Let’s start at the almost beginning. DiPietro grew up as the oldest of seven children in a family that had emigrated from Italy to the Boston slums. His first foray into business was delivering newspapers, and then a few years later he began working as a kitchen boy in the Hampshire House in Boston, which later claimed fame as the actual “Cheers” bar.

His First Stroke of Luck

Here he was favored and mentored by the Maître d’ and the Chef, who also gave him food at the end of the day with which to help feed his family. This kismet meeting with these wonderful men, in DiPietro’s words, was his first stroke of good luck.

Taking Advantage of the Moment

Drafted into the Army, he became a mess sergeant while in Korea and discovered he was quite good at managing people. After an honorable discharge, he moved to Miami, where times were hard and money was slim. But he got lucky again when a friend called out of the blue, asking him if he could work for one night at the Miami Playboy Club. DiPietro borrowed an ill-fitting tuxedo, got a haircut at the local barber school, and thought how lucky he was to get even this one night of work.

As it happened, the girl who worked the door came to him with a problem. George DeWolf from the TV show “Name That Tune” wanted to come into the club and didn’t have the “club key” necessary to enter. Having been told by the manager that no one was allowed to enter without this key, not even “Jesus himself,” DiPietro politely denied him entrance. A couple of hours later, the manager and his friend George DeWolf came to the door and the manager was extremely irritated with DiPietro. Although trembling with fear of losing the night’s pay, he reminded the manager that he did exactly as he told him and denied entry to anyone without the club key. The manager agreed, apologized and offered DiPietro to stay on for another week, after which he awarded him with an invitation to the club’s management training program.

From there, he went on to work in the New Orleans, Chicago, and New York branches where he really learned how to deal with people. He then had the opportunity to work for the Holiday Inn chain, after which he obtained a position with the prestigious Restaurant Associates in New York and Boston. As the nation’s premier hospitality company, Restaurant Associates operates over 100 prestigious locations, which afforded him full exposure to yet another aspect of the hospitality industry.

This took DiPietro to Florida where he operated five restaurants for the upscale chain, Longchamps. After a number of years, DiPietro found himself unhappy with the situation and quit, which he quickly realized was a tremendous mistake, given the fact that he had a family to feed.

But of course, luck intervened, this time when a friend offered him the chance to work at the Bal Harbor Yacht and Beach Clubs for a few months where he simultaneously could comfortably look for another job. A few months became seven years before he left and headed to Boca Raton for his first job with a private country club, Boca Lago. After three years, luck strikes again, and Boca West Country Club is knocking on DiPietro’s door. 28 years later DiPietro is still the President, General Manager and COO of this elite private club that counts as one of the premier locations in the country. Demonstrating his enormous penchant for attracting luck, it was also his immense capacity for raising the bar on expectations when it comes to hospitality that keeps him at the helm.

Charity Work and Involvement in the Community

As the Chairman of the FLCMAA Seminole Region Charity Golf Tournament for 23 years, DiPietro is heavily involved in charity work for disadvantaged children in Palm Beach County. The committee’s beneficiaries include the Special Olympics of Palm Beach County, SOS Children’s Villages—Florida, Florence Fuller Child Development Centers, The George Snow Scholarship Fund, Unicorn Children’s Foundation, Toys for Tots of Palm Beach County, and many more. Over the years, DiPietro and the Committee have raised in excess of $4.4 million dollars.

In addition to his charitable service for the kids, DiPietro believes in helping the community. He has coordinated aid and relief for victims of Hurricane Andrew in Florida and the earthquakes in Haiti. He serves on many boards, including the Tri-County Humane Society, the National Jewish Hospital Board of Trustees, SOS Children’s Villages—Florida, Economic Council of Palm Beach County, the Business Forum, Workforce Alliance, Lynn University Advisory Board to the President and he chairs the Board of the Club Managers of America Club Foundation.

He has won numerous awards, inspiring others and keeping him involved in the things for which he feels the most passion. Among all of the accolades given to this generous and driven man, the one that says the most about DiPietro is the “Man With the Caring Heart” award, which is just what “Papa Jay,” as his friends call him, is all about.

Jay’s story brought tears to the eyes of everyone present during his interview. While he may consider himself the luckiest man in the world, we consider ourselves lucky to work with him and for the opportunity to hear and share his story with you.