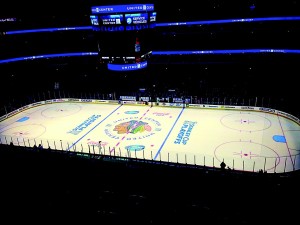 A lot of people we talk to love Maroon 5—young and old alike. Silky smooth vocals, catchy melodies, and talented instrumentalists make them a winning group that is worthy of the attention they receive. With so many fans across the globe, it is hard to narrow down who might truly be their biggest fan. Could it be teenaged girls? Middle aged woman? Not quite.

It turns out that one of their biggest fans may well be the NHL Team, the Blue Jackets.

When the Blue Jackets heard that Maroon 5 was going to perform at the stadium where they play, the Nationwide Arena in Columbus, Ohio, they wanted to make sure the team didn’t leave empty handed.

The Blue Jackets presented Maroon 5 with jersey-inspired bathrobes! These white bathrobes were designed to look like the Blue Jackets’ jerseys, and even feature navy blue and red outlined player numbers on the back.

What a treat! We bet these players have solidified their name in Maroon 5’s book—after all, what other team has done that for their favorite band?

We think they made a pretty good choice. Those customized bathrobes look like a great and fun gift to give your favorite rock star.

What a perfect gift! Props to you, Ohio Blue Jackets.