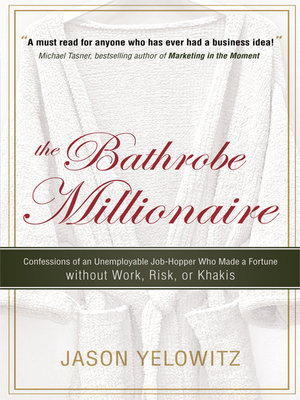 At Boca Terry we’d like to tip our hats to a man we admire: Mr. Jason Yelowitz, the Bathrobe Millionaire, a man who “made a fortune without work, risk, or khakis,” as he so beautifully puts it.  And we tend to think he did so inspired by one of our Boca Terry bathrobe specials.  Who knows…

Many of us have great ideas, but can’t seem to put them in motion. At Boca Terry, we were lucky. Our roots run deep due to being the brainchild of Bruce and Edward Cohen who, way back in 1996, decided to put their manufacturing genius into a business catering to the hospitality industry. Move up a few years to 2013 and voila! All the fruits of these consistent, disciplined, and committed years have brought us up the learning curve to becoming one of the leading companies in our field.

Doing It Your Way

We look at Mr. Yelowitz’s trajectory and smile. Bravo to you! In the inimitable words of Frank Sinatra, give or take a pronoun or two, you did it your way.

Ideas that Change the World

Yelowitz always had the entrepreneurial streak. It might have been there since his own start up, coursing through his DNA. In his twenties he was quite sure that, as the wise ones say, an idea can change the world.

Yelowitz grew up moving around a lot, which he says helped him adapt quickly to new situations and learn how to make new friends. This turned out to be fundamental in preparing him for his career as a millionaire.

Making Serious Dough Without Showing Up

In 1995 he had a roommate who started a web-based business, which grew in a very short time to one that employed 100 people in a very large office. Yelowitz soon became the manager of Business Development for this company, starting an affiliate program where he got his first inkling of how one could make some serious dough without having to show up.

From his in-depth knowledge of how to handle affiliate marketing through Google’s AdWorks, which at the time allowed people to gain a hefty income, Yelowitz was also adept at search engine optimization (SEO), how to create potent keywords, and how to convert clicks into cash. With his focus on real estate, he built up to generating approximately 2,000 leads a day as an affiliate marketer for the large website company where he worked. Because of his prolific success, his employer eventually dropped all other marketing protocols in the face of Yelowitz’s astounding abilities.

At a certain point, Yelowitz began exploring the idea of going out on his own as an affiliate marketing expert and an Internet business broker. As is the case with most of these overnight millionaire stories, he had three companies, and each one failed, including one that was financed in part with $10 million from investors. Three times a failure, he was determined to never make the same mistakes twice, and began his fourth attempt in a wholly different way.

Enter the dragon. With tailed coiled and nostrils flared, Yelowitz displayed his relentless discipline, well-honed determination, and ability to reinvent his plans. This time he started a company with no investment. This meant no office, no staff, no 80-hour workweeks. His new credo: don’t risk too much. Instead, he invested only half of his available capital and limited himself to this and only this amount. He realized that he didn’t need to make the conventional investments in advertising, business cards, and all the rest. His investment was his expertise and his focus. This focus was on making money, not spending it.

With a risk-adverse mindset, Yelowitz felt he could finally achieve a lifestyle of sitting around in his proverbial Boca Terry bathrobe making money. He knew he could achieve this kind of freedom, living more casually by taking advantage of the Internet, rather than remaining in a corporate environment that was gradually eating away at his buoyant nature. Yelowitz wanted financial and emotional freedom and he was determined to go the road less traveled to find the way of life that suited him best.

Providing the Wherewithal to Live the Dream

Becoming independently wealthy by taking risks, by sticking to what you know, by learning from your mistakes, by being disciplined enough to spend whatever time is needed to launch your vision and see it through… these are the elements that have provided Yelowitz with the wherewithal to live his dream.

A testimony to the true entrepreneurial spirit, you don’t have to sit in an office to make it big. Now married, living in a beautiful home, traveling when the spirit moves him, doing volunteer work that inspires, and having a schedule that requires maybe a half an hour a day of concentration, Yelowitz has become a millionaire and then some, after ten years of paying his dues.

Stick With What You Know

Yelowitz’s formula in a nutshell? Stick with what you know. Specialize. You don’t have to be an expert on everything. Hire people to fill in the gaps. Don’t make the same mistakes twice.

This self-made millionaire makes a very good point, especially in today’s climate where nothing can be taken for granted. Noting that young people are paying out enormous sums in college loans, often graduating with no chance of finding a good job in their field of choice, it is not a bad idea to focus on entrepreneurial activities that can’t be outsourced. If you have a knack for a specific thing, pursue it, believe in it, and hone it until it becomes pointedly aimed for the top. Be relentless in your attention to it, save your earnings, and watch it grow.

Celebrating Those with a Singular Vision

We felt we had to share this story with you, our readers, as we celebrate those whose singular vision has made them a success. We relate, and we want to encourage all of you out there who have a dream to do something on your own.  You can do it if you have a skill, passion, ambition, and an unrelenting drive to have a life worth living. And once you’ve accomplished your dream, all that’s left is to put on one of the many exquisite Boca Terry bathrobes, lie back, and be happy… all the way to the bank.

For more information on how we think and what we believe in at Boca Terry, please contact us.