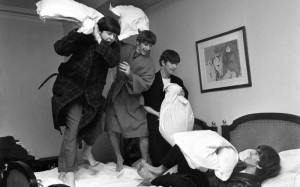 Bathrobes have been known to help make monumental memories from the time they debuted. Looking back at some of our favorite sleep-ready stars, we recall Harry Benson’s famed photo of the Beatles. A highly acclaimed photojournalist, Benson’s reputation rose along with the reputation of the famous four.

Many remember this iconic photo: the Beatles are in a playful pillow fight. George Harrison, their lead guitarist, lies on the bed, seemingly defeated. The rest of the crew—Paul McCartney, Ringo Starr, and John Lennon—stand over him, aiming pillows, thus sealing his fate in the bedroom battle.

Why It is Influential Today

This well-remembered 50 year-old photo from 1964 depicts the Beatles during their early 20s. They are young, fun, and lighthearted—a way that many fans struggle to recall them after the progression and evolution of their musical career, along with the unfortunate loss of two members.

Capturing Memories and Moments in Life

In a society that, even today, praises the Beatles for the innovative thinking, catchy tunes and their ability to seize teenage hearts during the 1960s, it may be hard to remember the band prior to their idolized stardom. This photo was shot before their big breakthrough. It signifies the band on the cusp of fame, somewhere between slightly known and absolutely worshipped.

What Benson captures, more than anything, is the human side of the Beatles. The fun photo shows them as down-to-Earth beings. It nearly makes the group look like a bunch of teenagers at a slumber party. Many aspects give the print this effect: the joyful looks on their faces, the playful act of their pillow fight and their cozy, almost-at-home robes. This photo makes the Beatles more relatable than thousands of others, which depict the group in their usual stiff, perfect lineup. 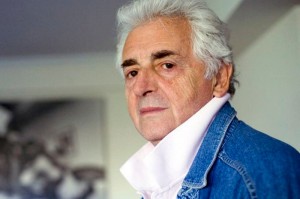 The Man Behind the Cam

The success of this photo (and the string of others taken during this period) enabled Benson to travel to America with the Beatles on their first US tour. Benson continued to rise in fame, as did the band. Soon, he was photographing Michael Jackson, Elizabeth Taylor, President John F. Kennedy, Queen Elizabeth, and more. He was featured in Life, People, Vanity Fair, and other noted publications.

A man of many subjects, Benson has captured the spirits of several world leaders, rock stars, actors, and the like—eternally keeping them young, and forever giving them life through the lens.