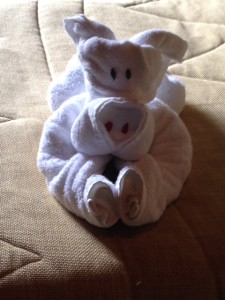 If you’re a frequent traveler, you’ve probably noticed that hotel staff are stepping up their towel game! From quirky designs to your favorite animals, towels are coming in all shapes and sizes these days! As you prepare for incoming guests over the holidays, it might not be a bad idea to bring hotel etiquette to your own home. In fact, it’s easier than you think!

1) Roll the left side in to the middle.

2) Now roll the right side in to the middle.

3) Roll the tube closest to you over the front.

5) Bend the bottom tube to make the legs.

8) Fold the remaining 1/4 in the opposite direction.

9) Pull the corner towards the middle.

12) Now roll the other side in to the middle.

13) All four corners should poke out at the top.

14) Fold the front corners over the front.

15) Tuck the corners under the cuff.

16) Now place the head on the legs you already made. You now have a towel dog!

1) Lay the towel flat in a “landscape” orientation.

2) Fold the top corners downwards and inwards until they meet in the center.

3) Roll the outside edges toward the center.

4) Fold the resulting arrow into a Z.

5) Lay the Z down and squeeze the corners to set the curves.

1) Lay the hand towel flat in a “landscape” orientation.

2) Fold the lower third up, lengthways.

3) Then fold the upper third over it, and fold the left corner to form a triangle.

5) Take the washcloth, fold to corner to form a triangle.

6) Fold the middle to meet the edge.

7) Fold the left and right sides over.

8) Fold in half. Turnover and spread the ears apart.

9) Place in front of the body. There’s your mouse!

1) Lay the towel flat in a “landscape” orientation.

2) Fold both sides of your towel, lengthways, into the middle.

3) Now roll both sides until they meet in the middle.

6) Take your washcloth; fold the top two corners towards the middle, forming a triangle.

7) Roll the right side diagonally…

8) …then the left side to meet it in the middle.

10) Under the two corners sticking up, fold down the cuff and pinch it at the back.

11) Keep pinching the cuff while turning the ears inside out.

12) Place the head on the body, and there’s your elephant!