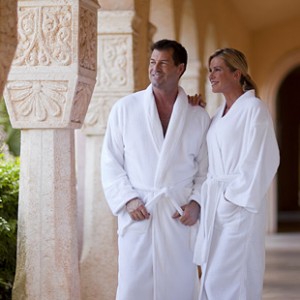 The easiest way to make hotel and spa guests feel more relaxed and comfortable is with soft robes. Hotel managers remember the way that they felt the first time they slipped into one of those soft robes, and they want to make their guests feel the same way. When shopping for new robes, shoppers should consider the differences between some of the top materials. While terry is one of the most common, it comes in several different types, and each type is slightly different.

The only experience that many people have with terrycloth is in the form of washcloths designed for cleaning. Terrycloth is a soft material often made from cotton fibers. Designers typically create terrycloth on a large loom, which lets the manufacturer create large pieces. Manufacturers use terrycloth for clothing, cleaning products and even towels.

The cheapest type of terrycloth is standard terrycloth. Manufacturers use a large Dobby Loom, wrapping individual strands of cotton around the loom. Once finished, the terrycloth features individual loops on both sides of the material. The material feels soft to the touch, and it is fairly absorbent.

As this is the most inexpensive version, it does have its downsides. The most common problem is that the loops sometimes unravel from the material. When this occurs, the terrycloth develops bare spots and feels less soft.

Microterry is unlike terrycloth because the material is actually synthetic. While terrycloth uses natural cotton, microterry features polyester. Some people think that polyester feels rough or harsh against the skin, but the process of making microterry makes the material softer. Shoppers might find the material listed as microterry fleece because it shares more in common with fleece materials.

Manufacturers create microterry on a large loom that pushes the polyester fibers close together. The tight loops add the softness that robes need. Some designers create blankets from the material, but many also use microterry for robes. The material isn’t as absorbent as terrycloth, but it is slightly softer than standard terrycloth.

What About French Terrycloth?

Many shoppers prefer French terrycloth because it has more stretch than ordinary terrycloth. This makes robes feel lighter and more comfortable, and the robes can fit guests of different sizes. French terrycloth is often more expensive than the standard version, especially when the manufacturer mixes other materials into the fabric to increase its elasticity.

Boca Terry is one of the top manufacturers of luxurious robes for hotels, spas and other businesses. Visit Bocaterry.com for a wide range of robes, including customized robes, silky robes and soft terrycloth robes. Shoppers can also reach the company by phone at (954) 312-4410 or toll-free at (877) 421-6001, extension 210. The company also has a toll-free fax number for those seeking information, and customers can fax Boca Terry at (866) 530-9743.